Repair the most difficult stripped threads

We’ve all stripped a thread before, and the problem may be more fixable than you think! Here’s how it’s done. A stripped or threaded nut or bolt can be a cause of unbelievable frustration. Time can easily be lost when it means an unwanted trip to the fastener specialist, or worse still, if the thread in question isn’t that easily replaceable.

Thankfully, tool manufacturers have considered this, and come up with a range of options to get your task back on track. So what tools are available to repair a damaged thread?

This one you may have heard of before. These can be purchased as metric or imperial sets if you only use one or the other; or as a massive combination set with taps and dies to cover all bases. Inside the kit you’ll find taps for repairing and creating inside threads, and dies for repairing and creating outside threads. Each of these is marked with the thread size and pitch it is designed to work with.

You’ll also find a die handle and tap wrench which each of these pieces can slot into, and the combination set contains thread pitch gauges to help you determine which tap or die you need.

How to use a tap and die set 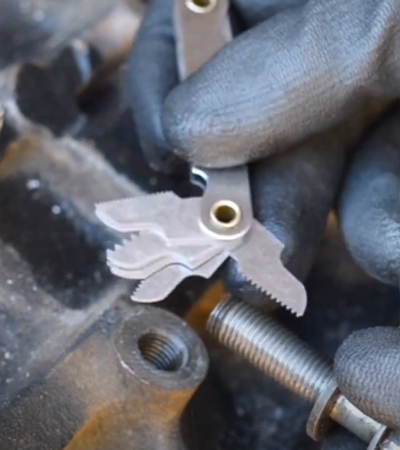 Great! But what if the thread is too large to be repaired with a die?

Some threads are too large or awkward to repair with a tap and die set, but all hope is not lost when there’s a thread repair file in your kit! Again you can purchase one for metric and one for imperial thread patterns. Fastener size does not matter when using a thread file, due to the nature of how you use it, which goes like this:

With these tools in your collection, you’ll barely bat an eyelid at stripped or damaged threads. You can even use a tap piece to create a brand new threaded hole, or a die to craft a bolt for very specific applications.