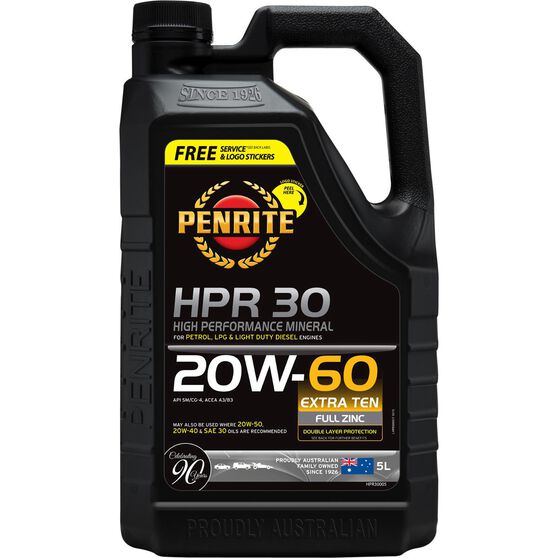 Is this product for you?

Penrite HPR 30 is a premium high performance mineral, SAE 20W-60, non-friction modified engine oil. It features a DOUBLE LAYER of engine wear protection with FULL ZINC and Penrite’s advanced EXTRA TEN technology. Protects against corrosion, oil oxidation and sludge under all operating conditions. It is particularly suited for use under high load conditions such as towing and competition or where ambient temperatures are high.

What does it suit?

Use in 4, 6 and 8+ cylinder naturally aspirated, supercharged and turbocharged petrol, LPG and diesel engines. It is also suitable for use in older Rotary engines. Recommended where SAE 20W-40 or SAE 20W-50 multigrade or where SAE 30 monograde engine oils were originally recommended by the manufacturer. It can be used where ACEA A3/B3 is recommended in model years prior to 2017 and also where API SM and previous API specifications SL (2001-04), SJ (1995-2000), SH (1992-1995) or SG (1989–1992) or earlier specifications are recommended. It is an excellent choice for older engines running on LPG where it offers an increased level of protection over standard grade petrol engine oils in the same application. It is also suitable for older diesel engines requiring an API CG-4, CF-4 or earlier specification engine oil. It can be used in motorcycles with wet clutch assemblies and in gearboxes requiring a SAE 30 non friction modified engine oil. Suitable in vehicles with a combined engine / transmission application such as BMC Minis, especially those used in competition conditions and in older Mazda Rotary engines in R100, RX-2, RX-3, RX-4, RX-5 and RX-7 manufactured between 1969 and 1991. For use in passenger & competition cars, motor cycles & light commercial vehicles and is compatible with petrol, LPG, diesel & e10 for on road use & racing fuels such as methanol, nitro, avgas, alcohol & e85 for competition use.

Checking and Topping Up Engine Oil

How to Change Oil & Filter

How To Check Under the Bonnet

Signs That Your Vehicle Requires an Oil Change

In this article, we are going to explain some of the signs of your engine requiring an oil change
Read Article

The Basics of Engine Oil

How important it is for you to change your car’s engine oil?
Read Article

Never mix two different coolants together as it could cause a damaging chemical reaction.
Read Article